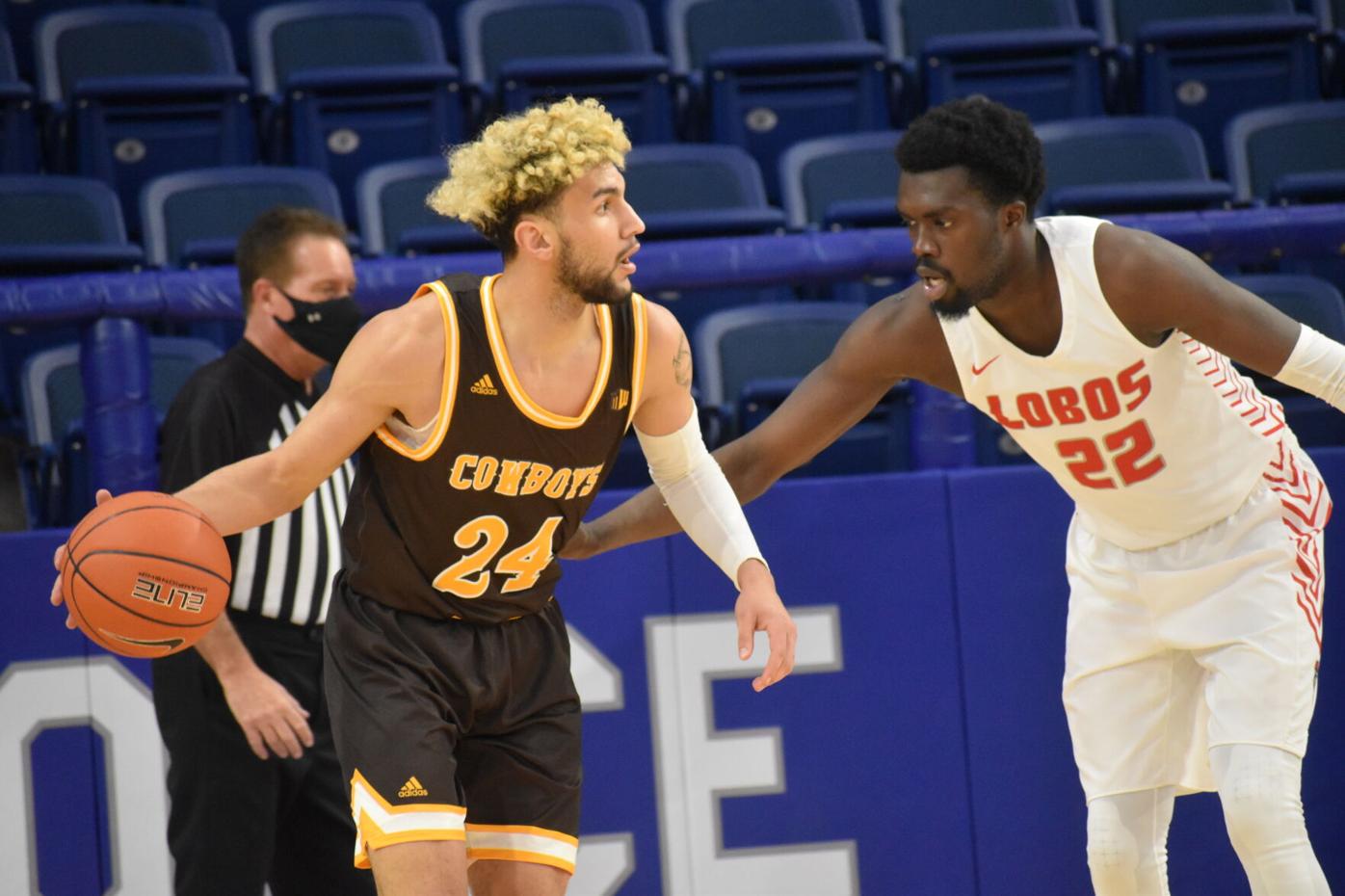 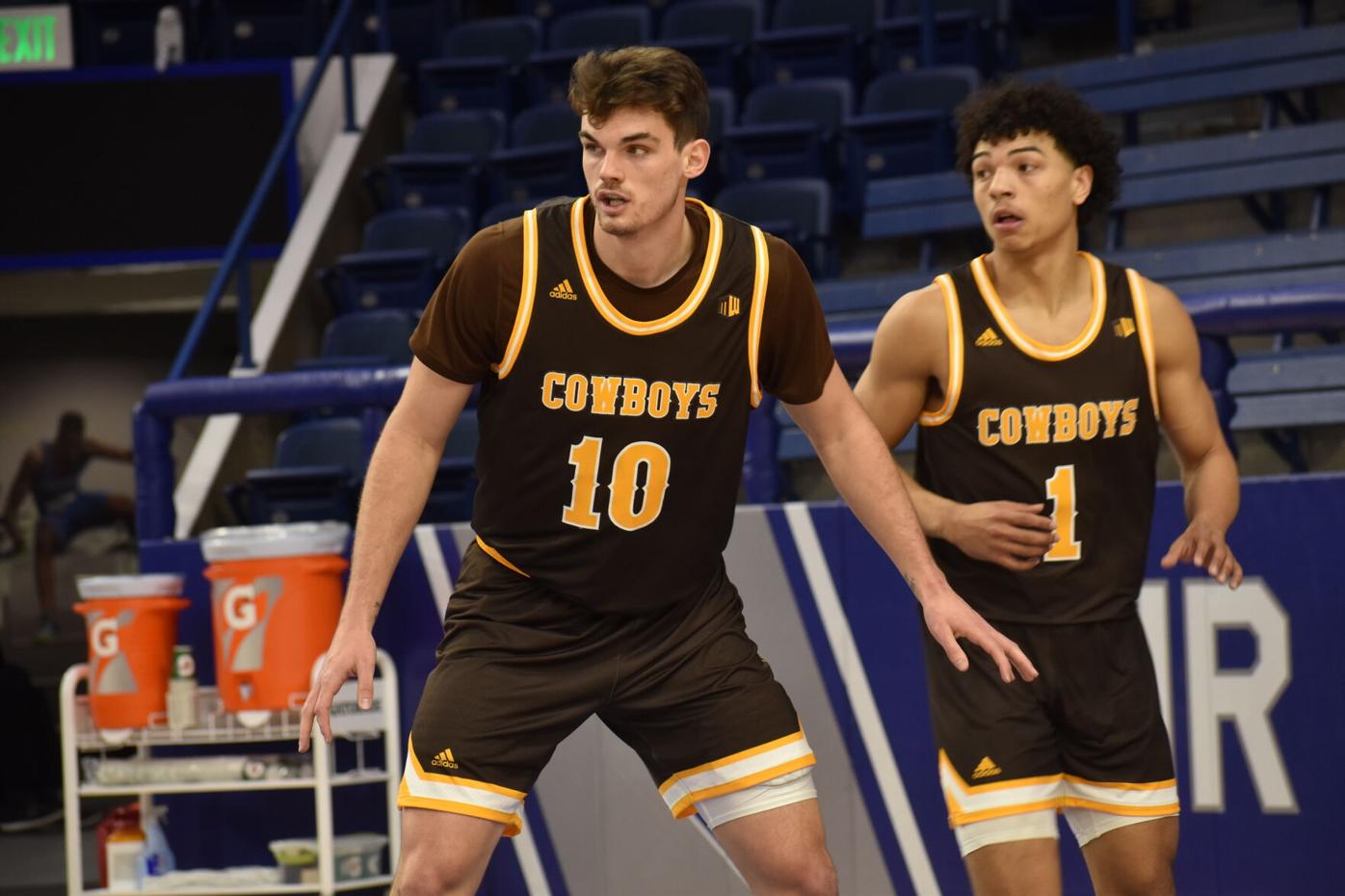 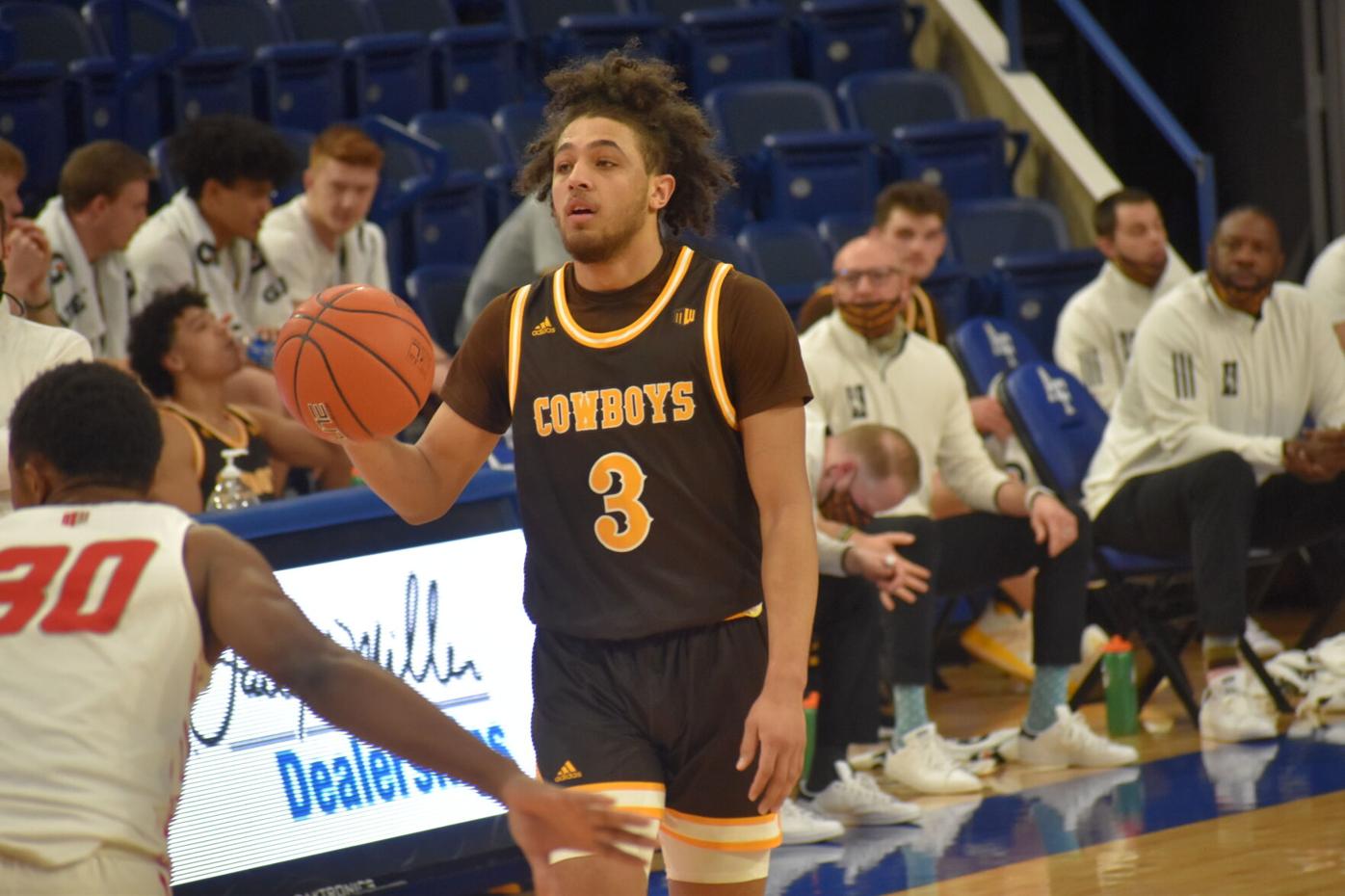 University of Wyoming sophomore guard Kwane Marble II brings the ball up the court while being defended by New Mexico's Kurt Wegscheider during the Cowboys' 83-74 overtime victory Thursday, Feb. 17, 2021, at Clune Arena in Colorado Springs, Colo.

University of Wyoming sophomore guard Kwane Marble II brings the ball up the court while being defended by New Mexico's Kurt Wegscheider during the Cowboys' 83-74 overtime victory Thursday, Feb. 17, 2021, at Clune Arena in Colorado Springs, Colo.

LARAMIE – University of Wyoming coach Jeff Linder didn’t get to see the end of his team’s game Wednesday night with his own two eyes. But even he knows his team grew up against a New Mexico squad that had nothing but upset on its mind.

Linder was ejected toward the end of the first half following a pair of technical foul calls, and under the watchful eyes of assistant Ken DeWeese, who finished the game as acting head coach, the Cowboys were locked in a back-and-forth second half battle with New Mexico, who was playing a “home game” at Air Force’s Clune Arena in Colorado Springs, Colorado, due to COVID-19 health and safety restrictions in Albuquerque, New Mexico.

With the game tied 71-71 at the end of regulation following alternating daggers from UW’s Xavier Dusell and New Mexico’s Javonté Johnson, Cowboys freshman Marcus Williams was unable to hit a twisting hook shot at the buzzer, sending the game to overtime.

The Cowboys were undeterred in the extra period, though, outscoring the Lobos 12-3 en route to a much-needed 83-74 victory, snapping their four-game losing streak in dramatic fashion.

After a shaky second half, the Cowboys held their ground on defense in overtime, as the Lobos shot just 1-of-9 from the field. It was UW’s first game in nearly two weeks, as their scheduled series last week against Utah State was postponed.

For a team that has had its share of struggles in recent weeks as Mountain West play has ramped up, it was a good sign.

“I’m leaning on (assistant coach Sundance) Wicks, coach (Shaun Vandiver). Those guys have experience. It wasn’t just me … I want to shout out the those guys.”

Williams led all Cowboys with 17 points, and sophomore guard Kwane Marble II had a double-double with 12 points and a career-high 12 rebounds.

The game got off to a strange start when it was delayed for about 10 minutes due to a snow storm that halted UW’s arrival. Fittingly, it only got more odd from there.

The first half Wednesday’s night was as strange as New Mexico (5-12 overall, 1-12 MW) playing a home game in Colorado should be, with the Cowboys (11-9, 5-8) at times looking like a well-oiled machine offensively, and at other times looking like a team that hadn’t played in 11 days.

Both teams got off to a slow start before UW broke things open with a 9-0 run midway through the period to take an eight-point lead. The Cowboys then went scoreless for 6 minutes of game action, with the 0-for-10 field goal drought being broken up by a 3-pointer from redshirt junior forward Hunter Thompson. Thompson went on to hit two more from deep in the period to give UW a four-point halftime lead, despite the Pokes shooting just 33.3% from the field.

The real fireworks took place just before halftime, however, when Linder was ejected from the game on consecutive technical fouls, which led to a bizarre sequence of six consecutive New Mexico free throw attempts without an explanation from the referees. The Lobos made just two of those, however, and were 6-of-17 from the line in the first half.

Though Linder was thrown from the game, his passion was palpable on the court through the remainder of the game.

“If I were a player in the Wyoming basketball program right now, I would love (that passion),” DeWeese said.

Trailing 33-29 at halftime, New Mexico exploded out of the locker room, starting the period on a 19-9 run on 7-of-9 shooting to take a seven-point lead. The Cowboys battled back and exchanged body blows with the beleaguered Lobos, who have not played a single game within the confines of their home state this season. New Mexico was scorching from the field in the second, shooting 64% from the field with 20 points in the paint.

Trailing by a point, DuSell hit a go-ahead 3-pointer with 1 minute, 34 seconds left in regulation, and Marble hit a pair of free throws to put the Cowboys ahead by three. Johnson calmly countered, however, with a 3-pointer from the corner to tie the game and eventually send the contest to overtime.

It was all Cowboys in the extra period, though, as UW made 7-of-8 free throws and scored 12 points overall, led by Marble’s four.

The Cowboys received major contributions from Thompson, who hit a huge 3-pointer in overtime and finished with 14 points overall, his first time scoring in double-figures since Jan. 2. Six different UW players finished in double-digit scoring.

“We’re excited for (Thompson),” DeWeese said. “He came up with some really huge offensive rebounds … He’s had a rough patch right now, but he just keeps fighting every day.”