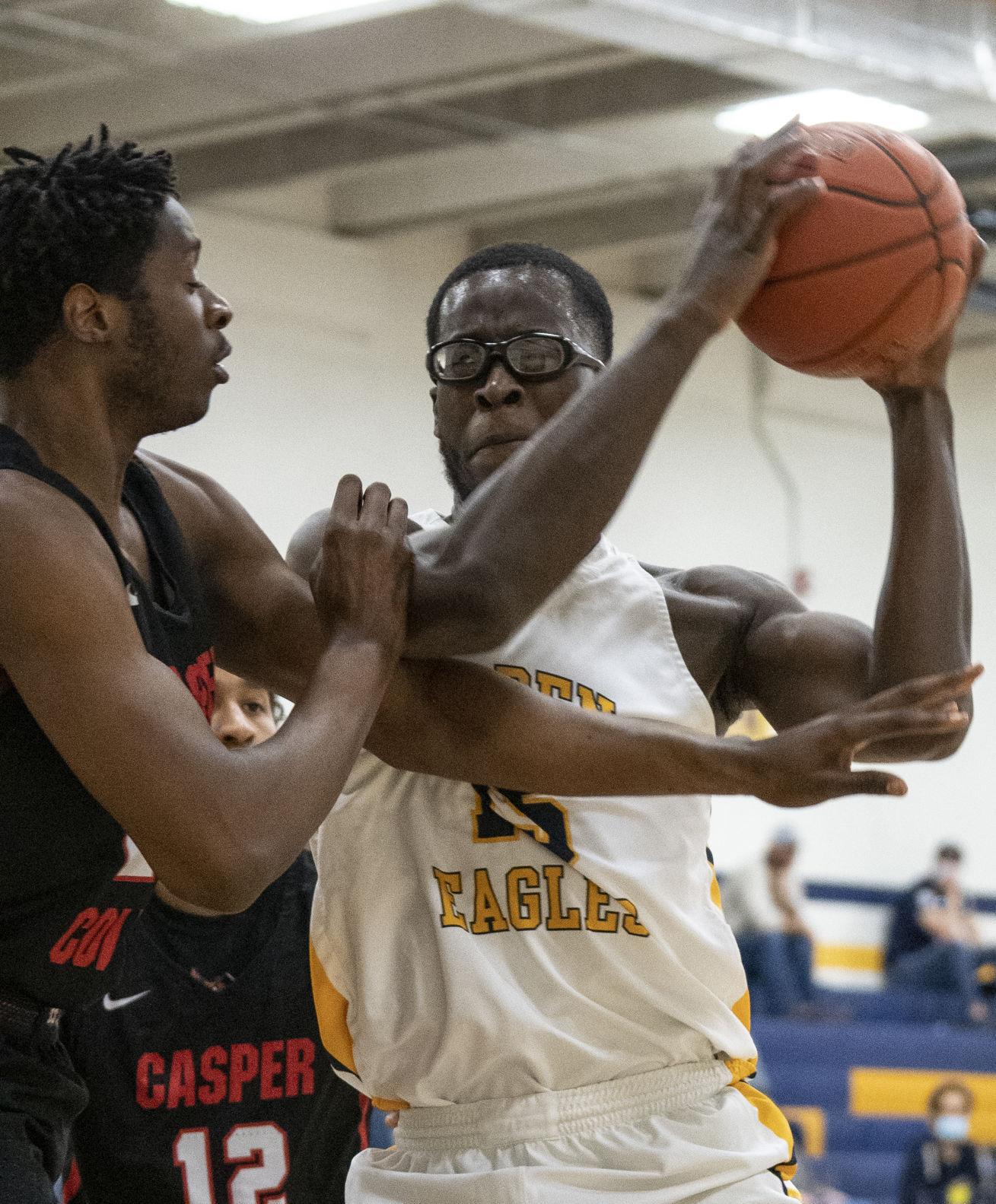 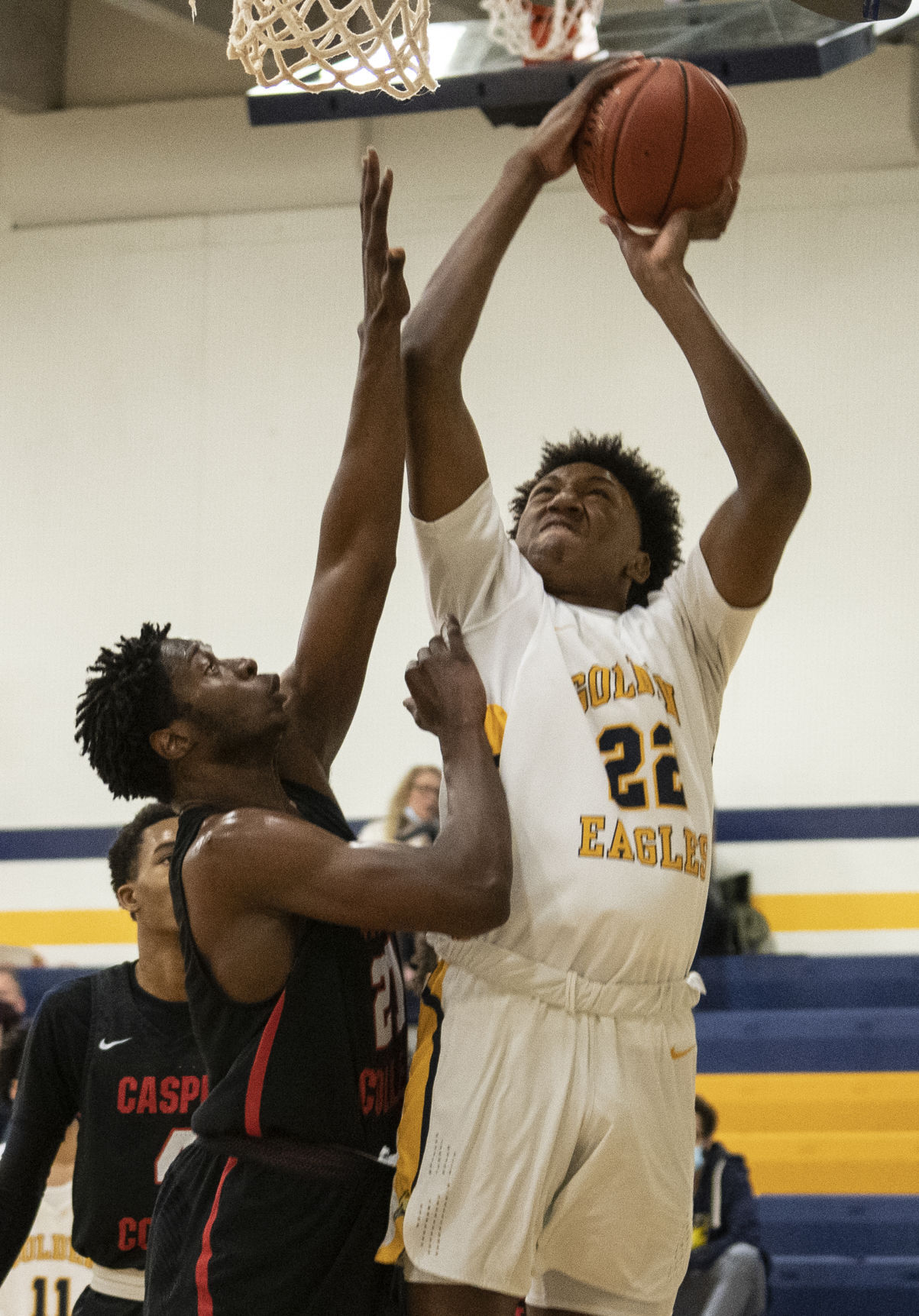 CHEYENNE – It took the Laramie County Community College men’s basketball team a handful of games to iron out the roles different players were going to have this season.

With four guards capable of filling up the score sheet, there weren’t many points left to be had for its four forwards. That didn’t mean the big men couldn’t contribute for the Golden Eagles. They just needed to be OK with doing the unglamorous things that are an important part of winning basketball games.

Sophomores Nolan Causwell and Ashraf Tchadouwa embraced that role, and are every bit as integral to LCCC winning eight of its last 10 games and clinching the Region IX North title as its four potent guards.

“A lot of teams will look at us and think they need to stop our guards in order to beat us,” interim Eagles coach DeWayne Saulsberry said. “That’s a good strategy, but we’re truly our best when our bigs are playing well. When they play well, we’re pretty tough to beat.”

“Early in the year, we were worried about scoring, but we realized that wasn’t going to be our role,” Tchadouwa said. “We had to sacrifice and grab rebounds, block shots and dunk it in the paint.

“We can impact the game without scoring. We’re the twin towers. We do the dirty work and help out the guards.”

Tchadouwa averaged just 3.9 rebounds and 3.1 points during his first season with the Eagles. The Toronto, Ontario, product was already considering spending the summer in Cheyenne before the COVID-19 pandemic hit, but the emergence of the novel coronavirus kept him in the United States.

While Tchadouwa’s mother was worried he might contract COVID-19 traveling home, her biggest concern was that travel restrictions various governments were enacting might keep him from getting back to the capital city for his sophomore year.

Tchadouwa credits spending the summer as one of the few people on LCCC’s campus with helping him play at the level he has this season.

“When the gyms were closed, I went to a park close to campus and worked on my game,” the 6-foot-7 forward said. “When the gym opened back up, I worked with coach Roybell (Baez) on the things I struggled with my freshman year.”

Tchadouwa is Muslim, and his dedication to basketball often kept him from fasting during Ramadan. He was afraid abstaining from food or drink from dawn to dusk would leave him too weak to compete in the sport he loves, so he often didn’t fast during the holy month. That changed when basketball became an uncertainty last summer.

That observance also helped him this season, he said.

“I worked on my body and shed a few pounds, and that ultimately helped me get more athletic,” he said.

Saulsberry was an assistant at LCCC during Tchadouwa’s freshman campaign. Tchadouwa has grown out of the timid play that held him back last winter.

“Sophomores usually have a lot more confidence because they’ve been through a whole year of college and they’ve learned what it takes to compete at this level,” Saulsberry said. “He really wants to be good, and he badly wants to play basketball.

“That’s why he basically spent the whole summer here by himself. We were able to get him some weights so he could do some things, but he was basically left alone. He used that time to get better.”

This is Causwell’s first season at LCCC. He averaged 2.3 rebounds and 1.1 points during his freshman year at Gulf Coast State College in Panama City, Florida. The 6-foot-10 Georgia product was set to spend this season at Sheridan College, but the Northern Wyoming Community College District eliminated the sports programs at Sheridan and Gillette Colleges last June.

A Sheridan coach contacted Baez to see if LCCC might have a roster spot open for Causwell. It was hard for turn away someone as tall and long as Causwell.

But his tenure with the Eagles got off to a rocky start.

“We were looking at the box scores from our first five or six games recently, and I looked at Nolan and said, ‘Man, you were horrible,’” Saulsberry said. “We really weren’t getting any production from him. He gradually got more comfortable and started holding his own.”

Causwell eventually became the player LCCC had seen during practice.

“We all came together and accepted our roles,” Causwell said. “My job is to go hard after rebounds and do whatever I can to get second-chance points on the offensive end. That role is right up my alley.”

Causwell is the son of former NBA player Duane Causwell. The elder Causwell was the No. 18 overall pick in the 1990 NBA draft and spent 11 seasons with the Sacramento Kings and Miami Heat. All of his children have played college basketball.

“Basketball is a big part of our family,” Nolan Causwell said. “He was retired by the time I was born, but I watched some of his games on tape. He was a good shot blocker, and I feel like I’m pretty good at blocking shots.

“Some of my post moves also came from him.”

Jeremiah Johnke is the WyoSports editor. He can be reached at jjohnke@wyosports.net or 307-633-3137. Follow him on Twitter at @jjohnke.